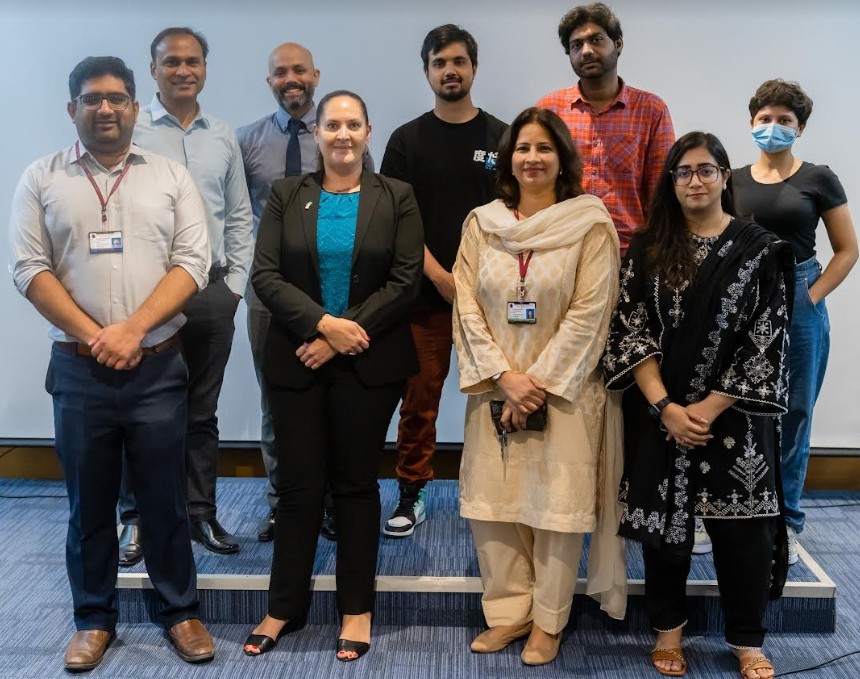 Ms. Anastasia Kolivas, Public Diplomacy Officer, US Consulate General in Karachi graced her presence at the film screening held at the Institute of Business Management (IoBM) on September 15, 2022. The Media Studies Department at IoBM organized the screening of two films under the 'Kitnay Duur Kitnay Paas' project organized by Seeds of Peace and supported by the US Consulate General in Karachi. The two films screened were “When Jay met Ammar” and “I Shall Not Hear Love.”  Mr. Belal Rizvi, Exchanges Coordinator, and Mr. Ali Chauhan, Education Advisor, representing the Public Diplomacy Office, US Consulate General in Karachi were also present. IoBM's President, Deans, Rector, HoDs, faculty, and media studies students attended the event.

While commenting on the occasion, Ms. Kolivas said that 42 talented Pakistani and Indian filmmakers were a part of this project. The US Consulate General in Karachi designed this project to showcase the art of storytelling, she added. This project offers mentorship to filmmakers and highlights the shared culture of Pakistan and India. Ammar Ahmed, a graduate of the BS Media Studies Department, IoBM was also among the producers. Ammar commented, “It was a pleasure working with filmmakers from across the border who share a similar history and the passion for promoting arts.” Filmmakers Shahrukh, Savera, and Ammar also had an interactive session with the audience. Dr. Nadia Ayub, Associate Dean, CESD, IoBM presented the vote of thanks.

The Future of NFTs. An opinion by IoBM's CTO Dr. Imran Batada

IoBM and NUST to collaborate on research and innovation

Web 3.0: The future of the internet. An opinion by IoBM's CTO Dr. Imran Batada

President IoBM recognized for his outstanding contribution to Higher Education